Rice professor has recruited and supervised more than 30 visiting scholars and Ph.D. students from China. 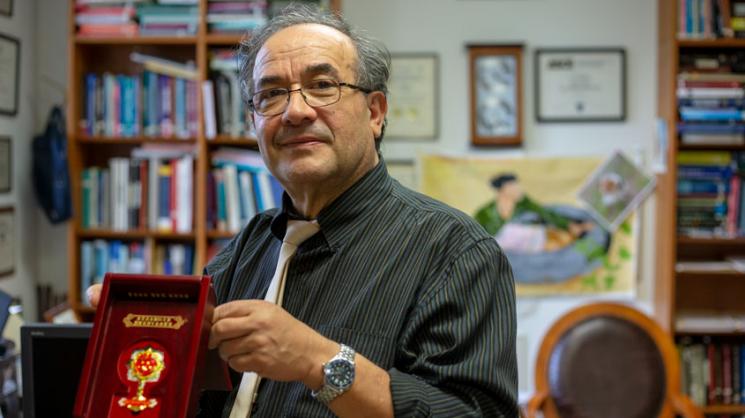 Pol Spanos, the Lewis B. Ryon Professor of Mechanical Engineering and of Civil Engineering at Rice University, has been awarded a medal by the Chinese government for his “important contributions to the founding and development of the People’s Republic of China.”

The medal was issued on the occasion of the 70th anniversary of the founding of the PRC, officially celebrated Oct. 1. Since 2008, Spanos has undertaken collaborative teaching and research efforts with more than 20 Chinese universities, including Tongji, Zhejiang, and the Harbin Institute of Technology.

In 2013, he was named to a Chang Jiang chair at Tongji University, Shanghai, by the government. Spanos helped establish its International Joint Research Center for Engineering Reliability and Stochastic Mechanics. He has recruited and supervised more than 30 visiting scholars and Ph.D. students from China, and in 2017 he received the PRC’s International Scientific and Technological Cooperation Award.

A leading expert on the reliability, dynamics, and vibrations of structural and mechanical systems, Spanos joined the Rice faculty in 1984. He has published more than 350 technical papers, authored or edited 20 books, and supervised the theses of more than 75 master’s students and the dissertations of more than 55 doctoral students.

He is president of the Engineering Mechanics Institute of ASCE and chair of the executive board of the International Association for Structural Safety and Reliability. Spanos has been elected an Honorary Member of the American Society of Mechanical Engineering and the ASCE, the highest honor given by each organization.